Donate To This Event

The rosters are comprised of the top 60 rising high school seniors from across the nation. The players are identified and selected through a series of Perfect Game events.

Far more than just a game, the event provides a once-in-a-lifetime opportunity for the players selected. While in San Diego, the All-American players will participate in a series of baseball related activities in addition to interacting with children undergoing cancer treatment at Rady Children's Hospital. 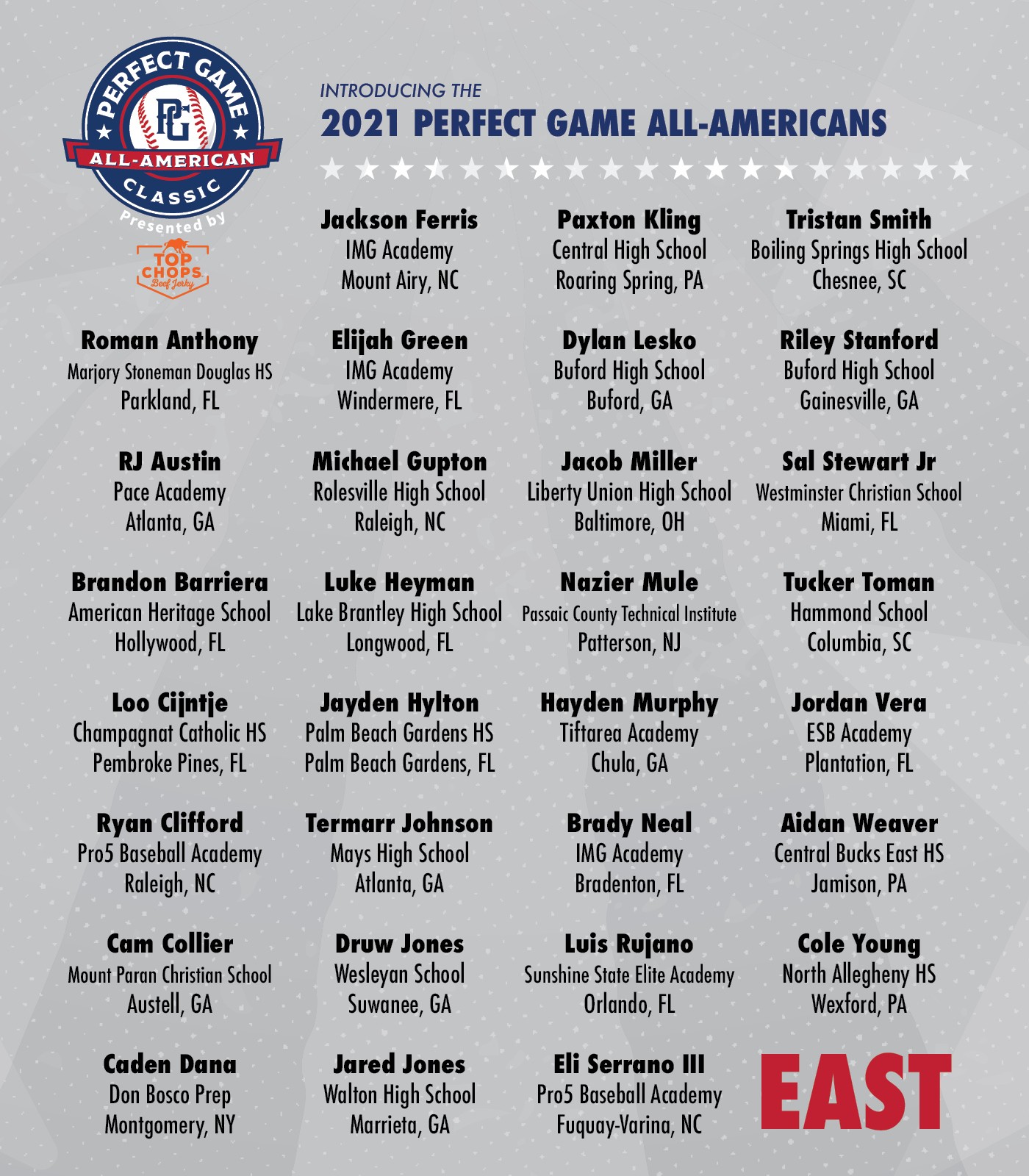 NOTE: Fundraising competition cutoff is 12 PM EST on Saturday, August 21. Top fundraisers will receive their awards at the banquet.

In the weeks leading up to the game, every player in the Perfect Game All-American Classic Presented By TOP Chops Beef Jerky will have the opportunity to conduct an online fundraising contest to raise funds for pediatric cancer patients. Since the inception of the PGAAC, more than $1 million has been raised with the bulk of it going to the Peckham Center for Cancer and Blood Disorders at Rady Children’s Hospital since the game moved to San Diego.

Who were the top fundraisers in 2020? 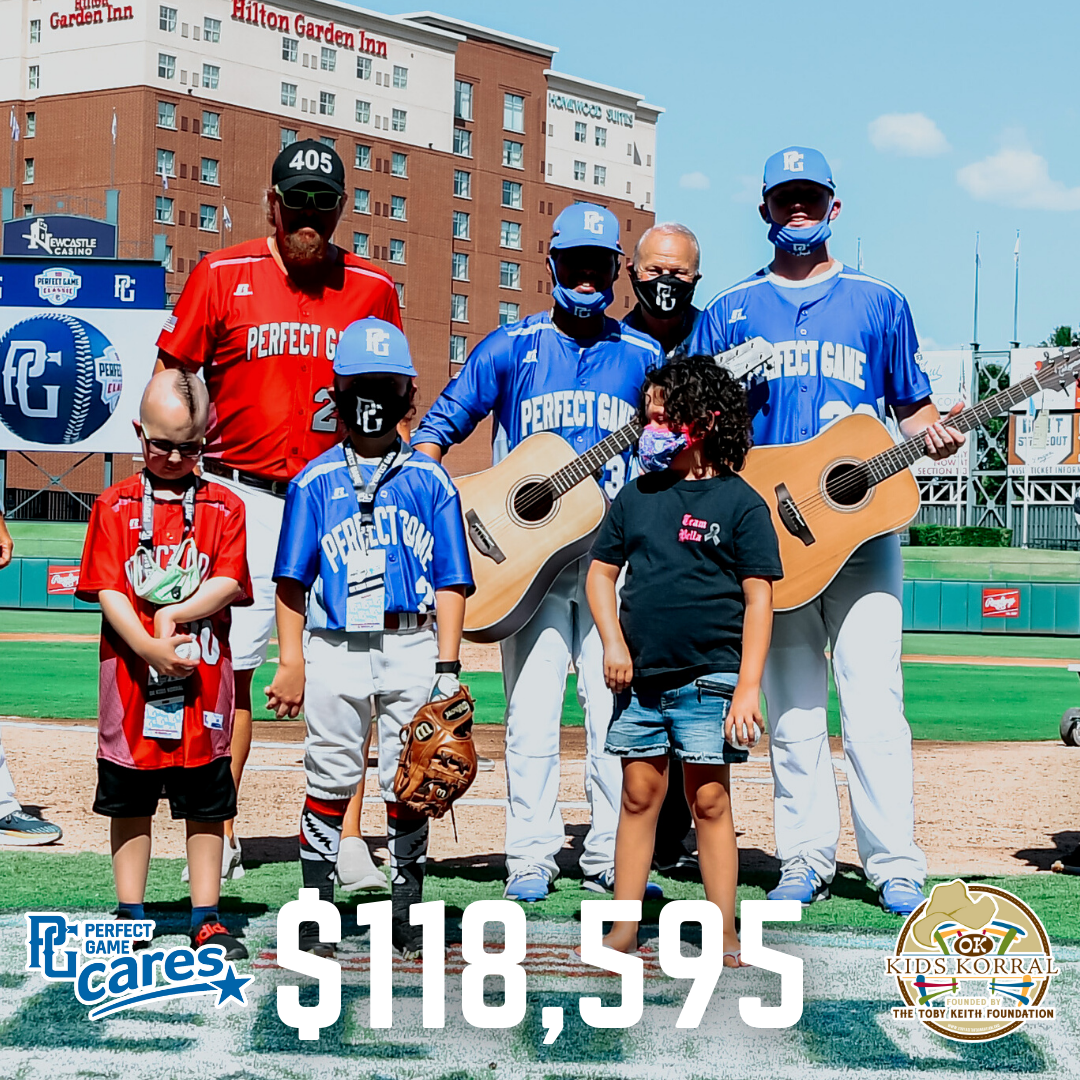 Your time visiting these beautiful children will be something you take with you for years to come. Together, we can make a real difference in the lives of these kids. Every dollar we raise gets us that much closer to changing the narrative for these families.

Your personal fundraising page will launch prior to the game.

We will email you your login and password. Make sure to personalize your page.

Every dollar counts in the race to save the life of a child battling poverty and cancer. Meet this year's honorary All-American, Carter! 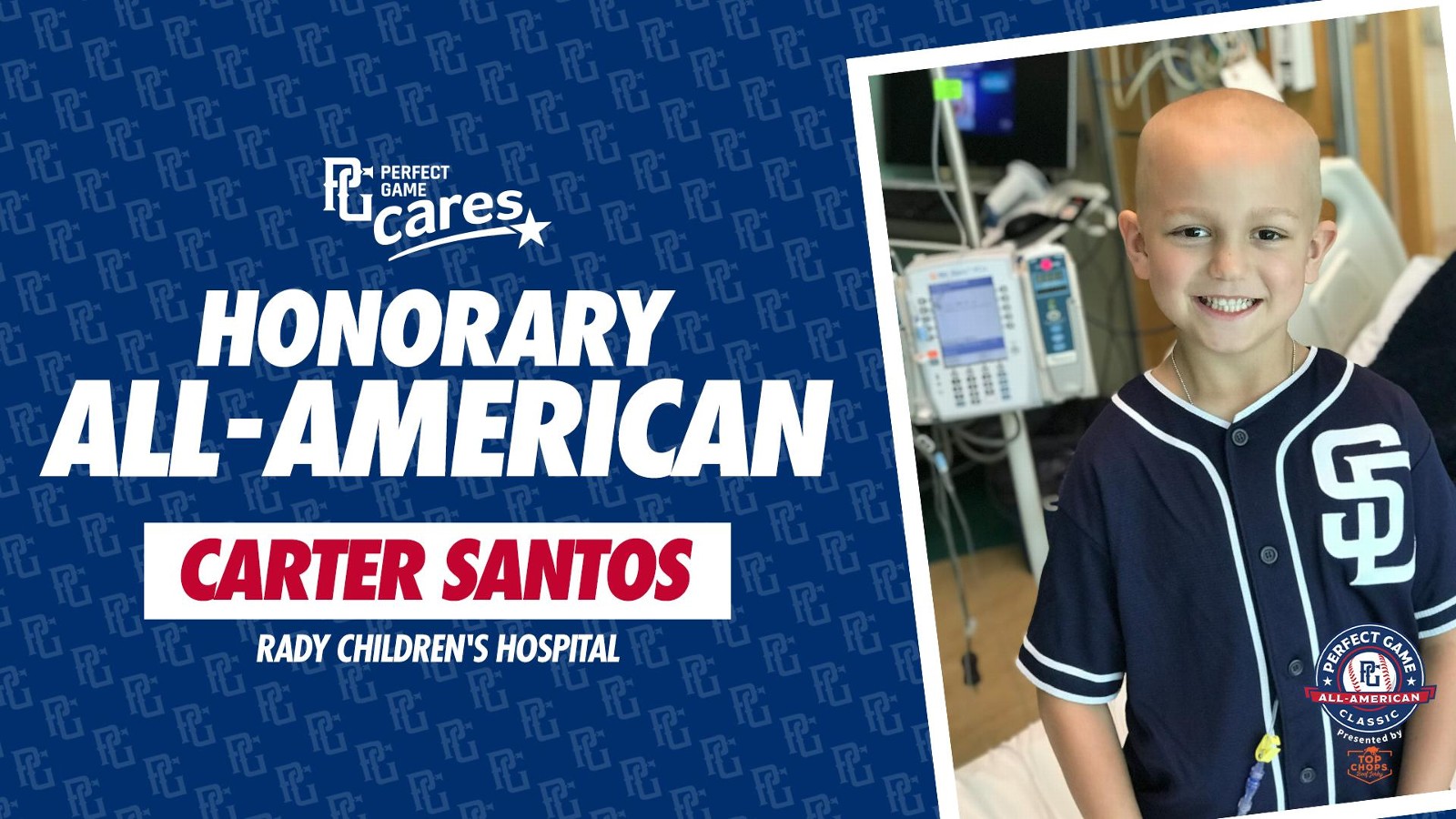 On December 11th, 2018, our lives forever changed. Carter wasn’t feeling well… After a simple heel prick at his pediatrician's office we were told we needed to take him to Rady's for more testing. We immediately went to the ER and after a couple of hours of testing, the doctor came and said “Today is a day your family will never forget. I am sorry to tell you your son has Leukemia.” This news was devastating. Cancer in our baby boy felt unimaginable.

Carter was immediately admitted to Rady Children’s HemOC Unit. Over the next 36 hours he received a blood transfusion, 3 platelet transfusions and had a bone marrow aspiration. We received the news that he was diagnosed specifically with B-Cell Acute Lymphoblastic Leukemia. We learned his treatment would be 3.5 years long and that the first 9 months of treatment would be intense, REALLY intense.

Carter spent 20 days in the hospital including Christmas Day after his December 11th diagnosis. After being home for a few days, he was readmitted due to a fever. Carter had been complaining of abdominal pain for days and we pushed for more scans to see what was causing the pain. Within 30 minutes of the scan, the room was full of doctors and nurses and he was being wheeled down for an emergency surgery. The chemo caused a thinning of his intestinal walls which caused the walls to perforate, leaking air and waste into his abdomen. This is also known as sepsis. Cancer was no longer our greatest fear, now we were praying that Carter would survive this abdominal surgery. The surgeon removed 20 percent of Carter’s small intestine and performed an Ileostomy procedure landing Carter in the PICU, an experience we will never forget.

Carter slowly started to heal and gain strength. He was able to resume treatment for the cancer a few weeks later now that the sepsis had been resolved. His bone marrow was once again tested in hopes that the cancer cells were gone. Unfortunately, Carter’s were not. He was now considered to be in the highest risk category for B Cell ALL, lowering his survival rate, which meant he would receive a more intense chemo treatment. Carter pushed through the next phase of treatment like the warrior he is, adjusting to his new life with an Ileostomy bag, dealing with receiving several IV antibiotics a day and requiring more blood transfusions.

After 50 days in the hospital, Carter was finally discharged and our family was all together again in our home. At the end of the 8-week consolidation phase, the bone marrow was tested again. We received the awful news that Carter STILL had cancer cells, again lowering his survival rate and leaving us beyond devastated. Genetic testing revealed that Carter’s cancer cells had an extra chromosome, known as being hyperdiploid. With this genetic difference, patients often take longer to respond to the standard treatment. Our oncologist Dr. Kuo decided to give Carter the next round of treatment and one more chance to hold off on a bone marrow transplant. Our daughters, Josie and Payton, had already completed the bone marrow match testing process, both eager to be a match and help their brother. We were thrilled to learn that Josie was a perfect match. There is a 25 percent chance that a sibling is a match, finally some great news! On June 10th, after Carter’s 4th round of chemo and 7 months into treatment and another bone marrow draw, we were given the incredible news that Carter was finally cancer free!

To date, Carter has been in treatment for 2.5 years, spent over 96 days admitted in the hospital. He has received 17 blood transfusions, 6 platelet transfusions, over 600 doses of chemotherapy and put under anesthesia 26 times. Carter entered the maintenance phase where his treatment will be complete in April 2022. He will be put under anesthesia 5 more times, receive daily oral chemo, 5 days of steroids a month, and a port accessed chemo monthly. His strength and spirit are nothing short of heroic and inspiring. We draw from him to show us that we are capable of so much more than we realize.

Through the last 2.5 years, we have become intimately connected with The Peckham Center and Rady Children's Hospital. It is impossible to put into words just how incredible the doctors and nurses are and how grateful we are to have access to such a top notch hospital for Carter. The Peckham Center has provided impactful programs beyond cancer treatment like healing touch, genetic testing, child life services, and family counseling. As we watch Carter grow and crush his chemo we want to share our gratitude with everyone in the Peckham Center and Rady Children's Hospital.

Beginning in 2018, PG Cares extended free tickets to all San Diego families for admission to the game. We will continue that tradition in 2021 and hope to see the stands full of local families. It will be a great day at the park, watching the best of the rising senior high school baseball players, while raising money for the children experiencing pediatric cancer. 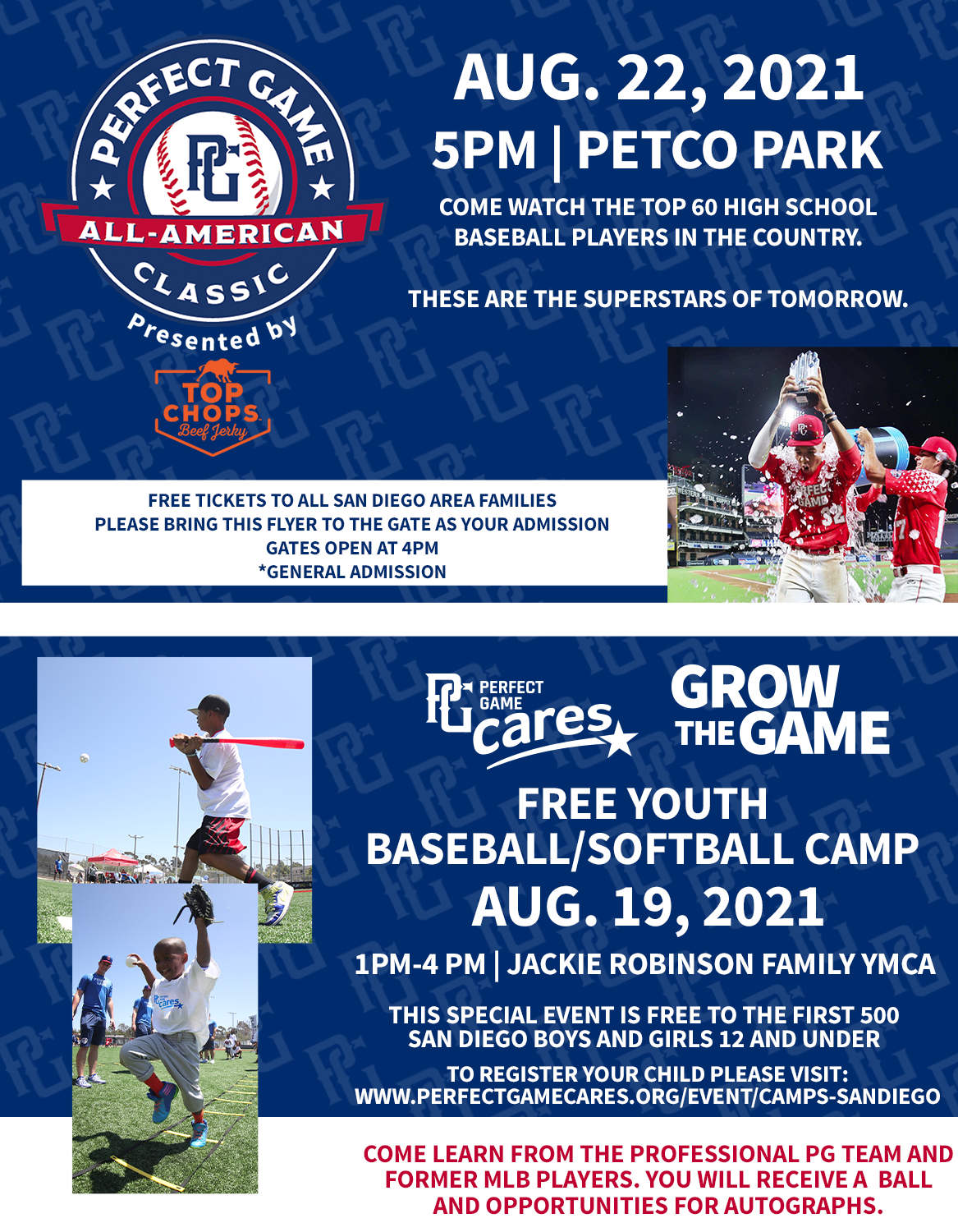 The 2021 Perfect Game All-American Classic and Selection Show will be streamed live on our brand new OTT channel, PerfectGame.TV, and broadcast on MLB Network. Coverage will be provided on MLB Roundtrip featuring Perfect Game on MLB Network Radio on Sirius XM.

Perfect Game is proud to have provided the platform and opportunity for more than 1,300 MLB players since it was founded in 1995. All Perfect Game events are run in select compliance with Major League Baseball's Pitch Smart initiative.